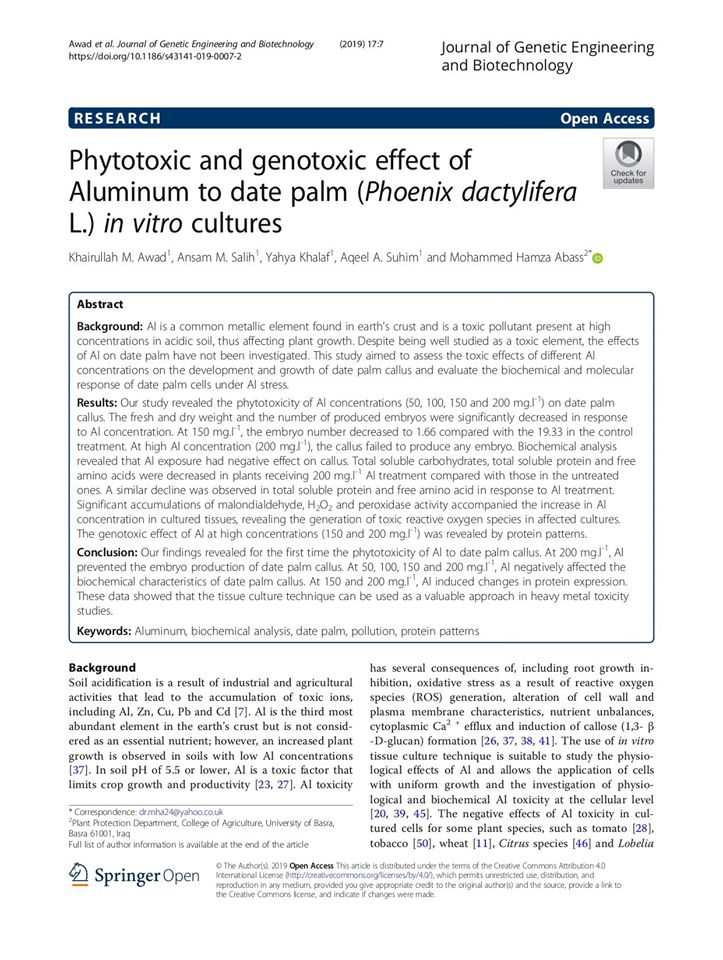 Researchers at the palm research center in Basrah University, Dr. Khairallah Mousa Aiwad, Yahya Nouri Khalaf, Aqeel Aboud Siheim, Mohammed Hamza Abbas and researcher Ansam Mahdi published a research about the toxic effect on cells and the genetic toxicity of aluminum in date palms - a laboratory study in the Journal of Genetic Engineering and Biotechnology Journal of Genetic Engineering and Biotechnology issued by the Academy of Scientific Research and Technology in Egypt which classified within Scopus and Clarivet.

The journal, which publishes in collaboration with the National Research Center (NRC), concern with publishes studies and laboratory research results worldwide to develop knowledge in plant and animal genetic engineering, medical, agricultural and industrial biotechnology and to present new perspectives in the field of research, including recombinant DNA.

The research aims to study the effect of some compounds and chemical elements, including aluminum, on date, producing palm.

The results of the study revealed that aluminum in high concentrations led to the reduction of dry and wet weight of date palms and that its toxicity has an effect on the formation of embryos and their content of carbohydrates and proteins and has another negative impact on the permeability of the membranes, which increased the hydrogen peroxide and thus gave a clear indication of oxidative stress.